Back to Capitol Updates

The legislature was unusually active for Legislative Days 5 through 8 between:

Among the issues the House is juggling, and in addition to the proposed city of Buckhead, there are several other bills proposing referendums for the creation of new cities. These new city proposals include the cities of Lost Mountain, Vinings, and East Cobb—all of which are located in Cobb County. The legislation proposing the cities of Lost Mountain and Vinings passed the House Government Affairs Committee’s Special Subcommittee on Cityhood this past week and are now pending in the full committee. The bill proposing the city of East Cobb passed the House by a vote of 98-63 on January 27th, but a motion to reconsider the legislation also passed, so this legislation will not move on to the Senate until another vote on the House floor is cast. It is important to note that these bills do not actually create cities, rather they authorize a referendum for voters located in the geographic area of the proposed city who will then vote on the fate of the proposed city.

This week there is no movement to report on HB 476, which is the bill that would allow the PELS Board to operate as an independent unit with its own dedicated staff that is administratively attached to the Secretary of State’s office. The bill is currently in the Senate Regulated Industries committee, which did not meet last week.

The legislative calendar is as follows:

Legislative Day 28: Tuesday, March 15 (Crossover—this is the deadline for legislation to pass the chamber that it was introduced in, i.e. a House bill must pass debate on the floor and “crossover” to the Senate by the end of this legislative day, otherwise that bill is ineligible to become law)

But more importantly, this past week Rebecca Sullivan was officially sworn in as Commissioner of the Department of Administrative Services! 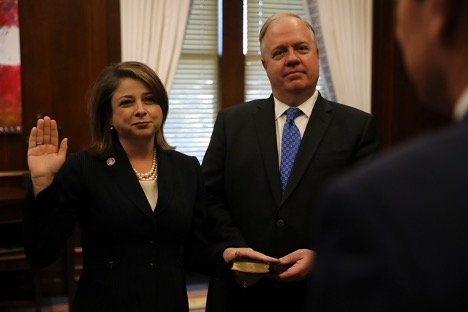 Other Legislation ACEC Georgia is following

HB 100 – By Rep. Carl Gilliard (D-Garden City) would exempt public mass transit, campus transit, and public school system buses from paying Georgia’s motor fuel excise tax. This bill would undermine the premise underlying the Transportation Funding Act of 2015 (HB 170) – that all users of Georgia’s roads and bridges should contribute toward their upkeep. ACEC Georgia is opposed to this bill. STATUS: Assigned to the House Ways & Means Committee.

HB 328 – By Rep. Martin Momtahan (R-Dallas) would establish a one-time right of way permit fee and reduce annual right of way use fees for telephone companies that is paid as due compensation for municipalities. STATUS: This legislation has passed both the House and the Senate; however, the Senate amended the bill last year. The House must agree to the Senate substitute before the legislation can be considered by the Governor. This past week, a special subcommittee on Right of Way Governance in the House Energy, Utilities, and Telecommunications Committee met to discuss the Senate’s changes, but no action can be taken by the committee, as the full House must vote to either agree or disagree to the bill as amended by the Senate.

HB 826 – By Rep. Ginny Ehrhart (R-Marietta) proposes the creation of the city of Lost Mountain in Cobb County. If passed, voters located within the geographic area will have the opportunity to vote in a referendum before cityhood can become official. STATUS: Assigned to the House Government Affairs Committee; passed the Special Subcommittee on Cityhood and will move to the full committee for a hearing there.

HB 840 – By Rep. John Carson (R-Marietta) proposes the creation of the city of Vinings in Cobb County. If passed, voters located within the geographic area will have the opportunity to vote in a referendum before cityhood can become official. STATUS: Assigned to the House Government Affairs Committee; passed the Special Subcommittee on Cityhood and will move to the full committee for a hearing there.

HB 841 – By Rep. Matt Dollar (R-Marietta) proposes the creation of the city of East Cobb in Cobb County. If passed, voters located within the geographic area will have the opportunity to vote in a referendum before cityhood can become official. STAUS: Passed the House January 27th by a vote of 98-63, but a motion to reconsider the bill has halted it from being transmitted to the Senate. The House will have to call the bill up to reconsider (and re-vote) on the bill before it can continue on to the Senate.

HB 854 – By Rep. Todd Jones (R-Cumming) proposes the creation of “Buckhead City” by de-annexing Buckhead from the City of Atlanta and making it its own separate city. If passed, voters located within the geographic area will have the opportunity to vote in a referendum before cityhood can become official. STATUS: Assigned to the House Governmental Affairs Committee.

HB 1039 – By Rep. Mack Jackson (D-Sandersville) would extend the income tax credit for expenditures on the maintenance of railroad track owned or leased by Class III railroads. STATUS: Assigned to the House Ways & Means Committee

HR 203 – By Rep. Josh McLaurin (D-Atlanta) is a proposed amendment to the Georgia Constitution which would modify the current Constitutional dedication of all motor fuel excise taxes for “roads and bridges” to instead allow those funds to be used for all public transportation purposes, including “roads, bridges, rails, airports, buses, seaports, and all accompanying infrastructure and services.” While ACEC Georgia is opposed to the diversion of existing revenue that is constitutionally dedicated to funding roads and bridges, we are also strongly supportive of the goal of finding additional funding mechanisms for the transportation purposes this proposal ultimately seeks to fund. STATUS: Assigned to the House Transportation Committee.

SB 98 – By Sen. Brandon Beach (R-Alpharetta) is a Freight & Logistics bill that would allow SRTA to negotiate public/private partnership investments in infrastructure that would provide a “substantial public benefit.” STATUS:  Passed out of the Senate Transportation Committee on March 3rd. Passed the full Senate on March 8 on a 53-1 vote.  Referred to the House Rules Committee.

SB 324 – By Sen. Brandon Beach (R-Alpharetta) proposes the creation of “Buckhead City.” If passed, voters located within the geographic area will have the opportunity to vote in a referendum before cityhood can become official. It has been assigned to the Senate Urban Affairs Committee, which consists of only Democratic Senators (who have been outspoken in their opposition to the proposal). STATUS: Assigned to Senate Urban Affairs Committee.